The setting for Act II of Raymonda is the Court of Love, which she has commanded her seneschal to arrange in honour of her fiancé.

A medieval Court of Love was held by noble ladies to instruct men on the nature of love, chivalry, and romance. It was also a celebration of the art of the troubadours; poet musicians who wrote romantic verses, set them to music and, accompanying themselves on the lute or viol, sang them in praise of a chosen lady of their affections, or sometimes in complaint of their beloved’s indifference to their entreaties.

On other occasions troubadours sang of knightly valour and some even went so far as to join the crusades in order to return with eye witness accounts of heroic deeds in great battles, no doubt embellishing their compositions when performing them for the families of knights who had participated in the crusade.

In fact their stories were so popular that the knights aspired to live up to the image they created and some historians go so far as to credit the troubadours with having created the medieval code of chivalry and the art of courtly love.

Every noble court had to have at least one troubadour in residence as well as hosting traveling troubadours, welcome visitors as they brought with them the latest news gathered on their journeys.

Troubadours originated in the 12th century in Occitania, the region of southern Europe covered by Languedoc and Provence, and extending into parts of Spain and Italy. They were responsible for a great flowering of creativity and were the originators of modern European literature. They wrote their lyrics in the Provencal langue d’oc while their counterparts in the north of France, the trouvères, wrote in the French langue d’oil. There was no class distinction among troubadours and they came from all walks of life, from commoners to the nobility. Even royalty aspired to the art including the King of Navarre, the King of Spain and King Richard the Lionheart of England, son of Eleanor of Aquitaine who herself was a great patron of the troubadours and, together with her daughter Marie Countess of Champagne, presided over her own Courts of Love at her castle in Poitiers.

Although troubadours were hated by the Roman Church a number of priests and bishops became well known troubadours including the notorious Fouquet de Marseille, Bishop of Toulouse.

Troubadours had their female counterparts, the trobairitzes, aristocratic women who were thought of as be very shocking and progressive in their time. A celebrated 13th-century trobairitz known only as Ysabella is identified by some historians as Isabella I of Jerusalem, mother-in-law of Jean de Brienne through his marriage to Maria de Montferrat.

To give an example of the daring of these noble ladies, here is an example of a song by the most famous trobairitz, Beatrice, Countess Dia:

Risqué stuff indeed for a trobairitz, let’s hope that her husband never found out what Countess Beatrice was up to. But it was the troubadours who were the pop idols of the Middle Ages and Bernard de Ventadour was one of the biggest names in the business – he would have been the star attraction of Countess Raymonda’s brilliant Court of Love.

No less that forty-five of Bernard’s poems have survived, eighteen complete with music, which is remarkable among twelfth century composers since the Albigensian Crusade dispersed the troubadours and destroyed most of the sources. His compositions are still performed and are available on a variety of CDs.

Also known as Bernart de Ventadorn, he is considered to be the master of the troubadour’s art, which he developed into a formalized style that defined and established the classical form of courtly love poetry for the next 150 years.

His influence spread far afield and in 1215 the Bolognese professor Boncompagno wrote “How much fame attaches to the name of Bernard de Ventadorn, and how gloriously he made cansos and sweetly invented melodies, the world of Provence very much recognizes.”

Bernard’s poems were mainly about love and nature and he was admired for his ability to skillfully portray his woman as a divinity and then, with a sudden but graceful and witty twist, turn her in to Eve, the cause of original sin and man’s downfall.

So what type of compositions would the celebrated Bernard de Ventadour perform at Countess Raymonda’s Court of Love? No doubt he would have composed a song to her beauty and as the occasion was in honour of her fiancé he surely would have included a song in praise of Jean de Brienne’s knightly valour.

Since all is in the imagination of Lidiya Pashkova we will never know, but to give an idea of his style, here are some of his actual verses:

Chantars no pot gaire valer,
Si d’ins dal cor no mou lo chans!
Ni chans no pot dal cor mover,
Si no i es fin’ amors coraus.
Singing cannot much avail, if from
within the heart comes not the song;
nor can the song come from the heart,
unless there be there noble love, heartfelt
Mas greu veiretz fin’ amansa
ses paor e ses doptansa,
c’ades tem om vas so c’ama, falhir,
per qu’eu no·m aus de parlar enardir.
But true love comes, not so lightly
Without fear and with no doubting,
We always fear that what we love may fail,
So I don’t dare to stir myself to speak
A lover’s complaint:
D’aisso’s fa be femna parer
Ma domna, per qu’e·lh o retrai,
Car no vol so c’om deu voler,
E so c’om li deveda, fai.
This is how she shows herself a woman indeed,
My lady, and I reproach her for it:
She does not want what one ought to want,
And what she is forbidden to do.

Can vei la lauzeta mover
De joi sas alas contra·l rai,
Que s’oblid’e·s laissa chazer
Per la doussor c’al cor li vai,
Ai, tan grans enveya m’en ve
De cui qu’eu veya jauzïon.
When I behold the skylark move in
perfect joy towards its love the sun,
when I behold the skylark, growing
drunk with joy, forget the use of wings,
so that it topples from the height of
heavens, I envy the bird’s fate.

So much for Bernard de Ventadour the master troubadour, but what do we know about him as a man? He was born between 1130 and 1140 at the castle of Ventadour in today’s Corrèze in the Limousin region of France. His mother was a house servant and his father a baker’s assistant whose job was to heat the bread ovens in the castle. However, one contemporary hints that Bernard was in fact the son of Count d’Eble III the lord of the castle.
From the content of an early composition Lo temps vai e ven e vire it is evident that he learned to write and sing under the tutelage of his noble patron, but growing into a handsome and intelligent youth he caught the eye of the Count’s wife, Marguerite de Turenne. They fell in love with each other and he composed songs to her beauty and grace.

When the Count realized that it was his wife to whom Bernard’s compositions were directed the budding troubadour was forced to leave the castle. He travelled to Provence where he lived at the court of Eleanor of Aquitaine and later took refuge at the Court of Count Raymond V of Toulouse.

Ever one to aim high, Bernard became enamoured of Eleanor of Aquitaine and followed her to the Plantagenet court in England when she married King Henry II. Later he returned to Toulouse in the employment of Raymond V and following the death of the Count in 1194 he entered the order of the Abbey of Dalon where he died sometime before the year 1200.

And there we have it – Countess Lidiya has led us on a wild goose chase once again – Bernard de Ventadour never could have starred at Raymonda’s Court of Love because he had been dead for more than 20 years at the time of our ballet!

Now, what about the supporting act – Beranger d’Aquitaine – did he exist or not? Well,
while Lydia Alexandrovna was researching the Middle Ages she would have come across several troubadours named Beranger (Berenguier), not nearly as famous as Bernard de Ventadour but real historical persons. 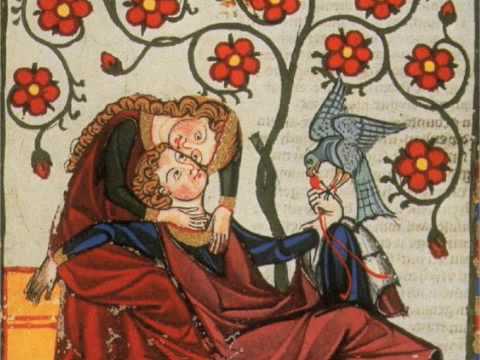 Unfortunately there was no Beranger from Aquitaine but there were two from the lands of the Counts of Toulouse; Berenguier de Poivert and Berenguier de Pozrenger, both troubadours from the Languedoc, and also Berengier Trobel a troubadour from the area of Quercy, Rouergue. Conveniently all three are listed as dates unknown, so take your pick, just as Countess Lidiya Pashkova did when she was dipping into medieval history and helping herself to whatever names she fancied!

So far we have discovered that four of the characters in Raymonda were real historical persons: Jean de Brienne; Countess Sibyl, who we have identified as Sibylla de Lusignan, sister-in-law of Jean de Brienne; King Andrew II of Hungary; and Bernard de Ventadour, even though he existed at the wrong time for our ballet. But are we ever going to find out if there was a real Raymonda or was she just a figment of Lidiya Alexandrova’s romantic imagination? That we will discover in part five when we reach the final stage of our search.